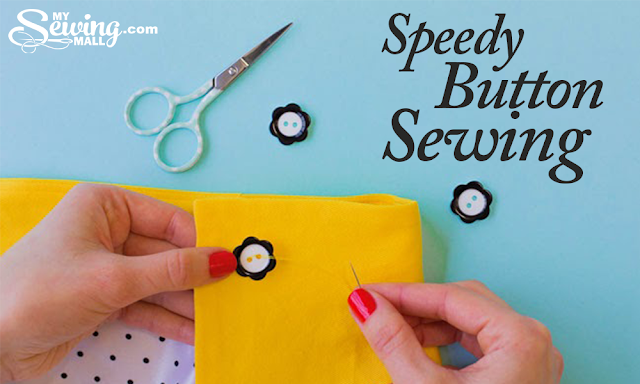 Buttons, whether functional or just decorative, are a favorite element on most of our projects, but we know you start rolling your eyes when you think about having to break out the needle and thread to sew on button after button. For some reason, button-sewing is stuck in our psyche as a dreaded, time-consuming task.

We’re here to tell you that need not be true! Read on to learn our favorite, super speedy, five-step process to perfect buttons.

Okay... we know this LOOKS like more than five-steps, but that's because writing out something really easy is actually one of the hardest things to do. Practice a few times, and it will become second nature... and will probably seem like just two steps!


Thread your hand needle with a double strand of thread.

To get a double strand, evenly fold your length of thread in half, so there is a loop at one end and two cut ends at the other.

Thread either the cut ends or the loop (doesn’t matter) through the eye of the needle.


Knot the thread ends and loop. To make this knot, bring all four strands together between your fingers so you can treat the four as one.

Wrap the thread around your forefinger, while holding the ends between your thumb and forefinger.

Roll the loop off your forefinger (with your middle finger), so you can see the thread tail in the middle of what looks like a circle.

Hold all the threads in position by pressing your thumb between your forefinger and middle finger using the end of the needle, pull the thread tail through the circle.

This creates the knot.

Pull the thread tails tight to finish and lock the knot.

Insert the needle through your fabric.

Bring the needle in, then back out at the same point.

Sew through the holes on the button twice. Twice around is all you need because your thread is already doubled!

To do this, feed the threaded needle through one of the holes on the button.

Go around one more time and you're done.

Knot the ends into the existing threads to secure and trim away the excess.

More things to bear in mind about buttons


The steps shown above will vary slightly based on the type of button you’re using. Our sample shows a two-hole button. Other common types are the four-hole and the shank button.

If your buttons are going to be highly functional, meaning there will be a lot of buttoning and un-buttoning going on, it's a good idea to interface the area behind the buttons for added support and stability. (We often do the same for zippers.)

When using very thick fabrics, such as the heavy wool you'd find on a coat, you need to leave space between the button and the fabric so the buttonhole can overlap the button and you can actually button and unbutton the thing! This is called a "thread shank." In order to sew on a button and create the needed space behind, use a toothpick under the button as you sew.

For very lightweight fabrics, you do not want to add any bulk. Using our quick method for sewing buttons, you need only go around once on sheers!

Finally, thread color is definitely a consideration when sewing buttons, and the decision depends on the finished look you want to achieve. Sometimes you want to match the button itself. Other times, it's more important to match the fabric, such as on a shirt placket. If the collar of the shirt is open, you don't want the button thread to stand out against the fabric. Finally, we sometimes choose a highly contrasting color thread for our button sewing in order to use it as an actual decorative element.

We also recommend using beeswax or a similar product to strengthen your thread when doing any hand sewing technique.

If doubling the thread as we show above is just not working for you, many thread companies offer heavyweight button sewing thread solely for this purpose. Ask about it at your local sewing supply retailer. 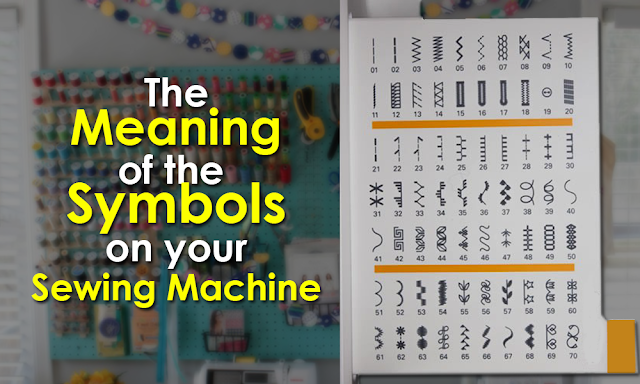 The Meaning of The Symbols On Your Sewing Machine

I have had a request for a post that shows you the different stitches on a sewing machine, telling you their names and purposes. It would be impossible to list all the stitches because there are hundreds if not thousands if you count the purely decorative stitches. But I will show you some common ones.
This the stitch panel on my sewing machine. There are 40 stitches, some of which are purely decorative.


00: This stitch is the movable straight stitch, meaning by altering the "stitch width" on your sewing machine, you can move the needle. It's default needle position is the far left. This is the stitch you will use the most often for just about everything.

01: This is the center straight stitch. It is like a safety straight stitch for sewing zips so that you don't hit the zipper foot. It cannot be moved. 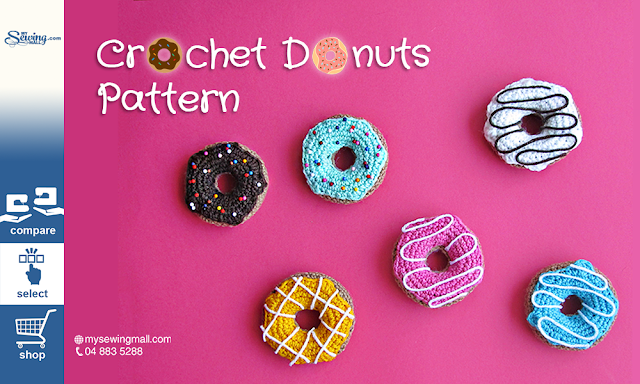 There's a unique allure that donuts possess, their round colorful physique seems to entice both kids and adults alike. Why not make cute little crocheted versions of them, to keep you salivating and yearning to have a bite on a real one?


We decided to make some crochet donuts using really bright colors for the icing! The cool thing is that they are very easy to make and once you get started you won't know how to stop!

- 100% Acrylic Yarn (light brown for the base, any colors for icing)
- 4mm (G) Crochet Hook
- Toy Stuffing
- Yarn Needle (to sew the parts together)
- Beads (for decorating)
- Fabric Glue (optional, you can also sew your beads on the icing)

Base with Light Brown:
Ch 18 and sl st in first st to… 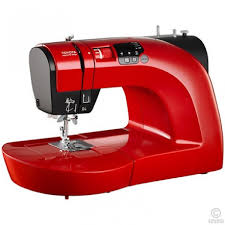 Oekaki, which is a Japanese word meaning draw, has introduced its all-new computerized sewing machine. We all know about the Japanese made products and this sewing machine has not dis…